CULCON IV
“Six years after the first United States-Japan Conference on Cultural and Educational Interchange met in Tokyo and nearly seven years after this series of bi-national discussions was brought into being by the decision of Prime Minister Ikeda and President Kennedy, the Fourth Conference convened in Washington,D.C. from April 3 to 8, 1968. General discussion of cultural problems in the first two Conferences had let to a more specific concentration on the role of universities in mutual understanding at the Third Conference, making it appropriate to devote the fourth meeting to the broader educational systems of the two countries. The subject was made particularly significant by the fact that Japan and the United States share world leadership in mass education and so have come to confront similar problems. Discussion at the Fourth conference benefited greatly from the atmosphere of cordiality which has developed in the course of previous Cultural conferences.” (CULCON IV, Joint Statement) 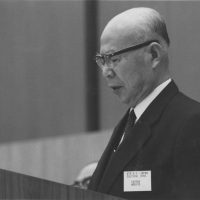